Basilisk mythology describes this "king of serpents" as a reptilian creature with sometimes rooster-like qualities who is famous for its ability to kill with a single glance.  Like its bird-lizard cousin, the Cockatrice, basilisks are said to be born from a union of serpents and roosters.

Pliny the Elder pretty much creates basilisk mythology altogether in his work "Natural History" from 79 A.D.  He describes a "serpent called the basilisk" of which "all who behold its eyes, fall dead upon the spot".

[The basilisk] is produced in the province of Cyrene, being not more than twelve fingers in length. It has a white spot on the head, strongly resembling a sort of a diadem. When it hisses, all the other serpents fly from it: and it does not advance its body, like the others, by a succession of folds, but moves along upright and erect upon the middle. It destroys all shrubs, not only by its contact, but those even that it has breathed upon; it burns up all the grass too, and breaks the stones, so tremendous is its noxious influence. It was formerly a general belief that if a man on horseback killed one of these animals with a spear, the poison would run up the weapon and kill, not only the rider, but the horse as well. To this dreadful monster the effluvium of the weasel is fatal, a thing that has been tried with success, for kings have often desired to see its body when killed; so true is it that it has pleased Nature that there should be nothing without its antidote. The animal is thrown into the hole of the basilisk, which is easily known from the soil around it being infected. The weasel destroys the basilisk by its odour, but dies itself in this struggle of nature against its own self. 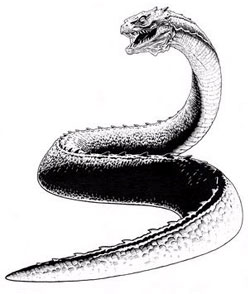 Return from Basilisk to the List of Mythical Creatures.