If there is one topic I am most hesitant talking about, it has got to be demons.  Why?  Because they are known to follow those who pay attention to them. This is a topic that can be somewhat dangerous to follow, so be warned here and now that when it comes to this subject, ignorance is most likely bliss.

Despite my desire to keep a healthy a distance from anything having to do with this topic, I couldn't possibly have a site called "Gods-and-Monsters" and not include the very beings which are the link between gods and monsters, so here you go...

In many ancient cultures, the word "demon" (or more commonly "daemon") didn't necessarily have the evil connotations that it has today.  It simply meant that the being was of a spiritual nature rather than a mortal.  Most of the ancient gods of myth were considered "daemons" at some point.  It wasn't until Catholicism came into power that we get the same interpretation that we have today.

The words "Demon" and "Demonic" in modern terminology have a direct connotation with evil.  The Devil himself is considered to be a demon - a spirit who in modern mythology seeks to consume or command the souls of mortals.

But the term "demon" is often generalized as meaning "evil spirits", becoming less and less specific the more they become generically "evil".  I wouldn't consider every ill-intentioned spirit to be a demon.  An angry spirit who has yet to move on, for example, isn't necessarily a demon, even if they cause trouble or are, in fact, evil.  Demons are of a higher-ranking nature.  They have the power to cross over and affect our plane of existence, if only for a little while at a time.  They are very, very powerful and potentially dangerous beings.

The most common purpose of a demon is thought to be demonic possession - the overtaking of a human's body in order to claim its soul. At least, this is the most popular interpretation of their intentions. People who are victims of demonic possession become controlled to various extents by these evil spirits.  The demon may try to physically harm the person or their family, but usually they seek to scare them.  Why?  Because excessive fear makes a person weak. 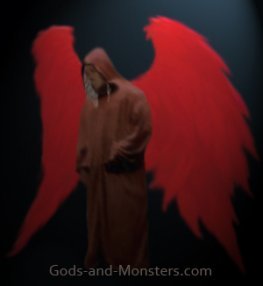 As a demon weakens its victim it gains more and more control over him or her.  As it gains more control it gets closer and closer to its ultimate goal - to own the soul of the victim.  Why they seek mortal souls most certainly has to do with gaining power and growing stronger.  In the world of the human, power is seductive.  In the world of the demon, power is everything.

One question I get asked a lot is summoning demons.  If you read the beginning of this page, you'll have already figured out that this is not an area that I enjoy delving into too deeply.  But if you insist, I'll give some information on demon summoning, if for no other reason than to convince you not to try doing it.

Due to the amount of demon questions I've been getting, I recently added an important section on how to get rid of them should you find yourself in trouble. Of course, I recommend not getting involved with demons in the first place, but it's probably good to have a few demon-fighting tricks up your sleeve either way. Please note that this article contains information on keeping demons at a distance. If you have already summoned a demon and are possessed by one, there's not a lot you can do except an exorcism.

I've also put together a collection of artwork featuring our demons of various sorts.  You can access the demon artwork collection here.

Return from Demons to the List of Mythical Creatures.