Though he is technically ranked as both a President and a Count, he is primarily known as Count Botis in the demon world. This powerful demon can be quite helpful, but will only serve those who are truly dedicated. Botis is actually quite friendly, but he doesn't like amateurs (who in fairness tend to gawk and freak out more than actually engage with the demon). He appears in various forms and tries to scare away the summoner, often creating visual and auditory hallucinations to test the will of those who want his help.

Count Botis takes on three main forms. First, he appears as a dangerous viper until he sees that the summoner is intent on staying. From here he shifts between forms and eventually reconstructs himself as what one might think a prototypical demon would look like, which is essentially a human form but has two sharp horns, large teeth, and carries a very big sword. It is in this form that he primarily stays and is known, but at the same time this is primarily meant for intimidation. Those who repeatedly summon (respectfully) and befriend the Count will come to see him in his final form, which is that of a winged old man in a monk's robe. He only reveals this form to those who have seen his intimidating show several times. 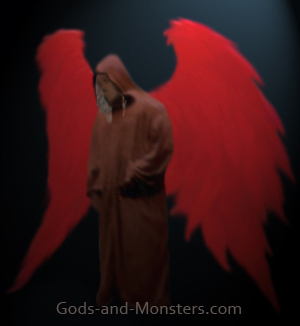 For those who pass his test, Count Botis will befriend and protect them - not physically, but socially and emotionally. The Count can ease tensions among friends and family, can keep one's social reputation from being damaged, and can even give guidance as he sees into both the past and the future.

The summoning circle for Botis should contain white candles and freshly picked lilies. The uranium ore safely encased in a lead container would most certainly impress and appease Botis, though this is likely going to be very difficult to obtain (and quite dangerous and probably illegal).

Return from Botis to the List of Demon Names.