Most people have heard of werewolves, but few know of the ancient race of dog-headed men, better known as the Cynocephali. A Cynocephalus was essentially a man with the head of a dog. They could understand language but had no ability to speak. Though they are sometimes depicted in artwork as being civilized, they were by all reports savage beasts who lived to hunt and to kill.

While this may sound like just another mythical creature, there are very good reasons to believe that the Cynocephali may have actually existed. Above all of them, these dog-headed men were described in reports by famous explorers such as Christopher Columbus and Marco Polo! 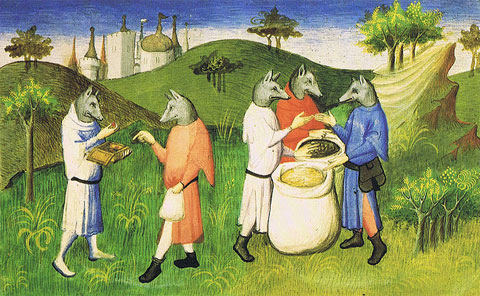 Around 400 B.C. the Greek physician Ctesias wrote the following passages (translated to English from Greek), describing the tribes of Cynocephalus.

"They speak no language, but bark like dogs, and in this manner make themselves understood by each other. Their teeth are larger than those of dogs, their nails like those of these animals, but longer and rounder. They inhabit the mountains as far as the river Indus. Their complexion is swarthy. They are extremely just, like the rest of the Indians with whom they associate. They understand the Indian language but are unable to converse, only barking or making signs with their hands and fingers by way of reply... They live on raw meat. They number about 120,000.

"The Cynocephali living on the mountains do not practice any trade but live by hunting. When they have killed an animal they roast it in the sun. They also rear numbers of sheep, goats, and asses, drinking the milk of the sheep and whey made from it. They eat the fruit of the Siptakhora, whence amber is procured, since it is sweet. They also dry it and keep it in baskets, as the Greeks keep their dried grapes. They make rafts which they load with this fruit together with well-cleaned purple flowers and 260 talents of amber, with the same quantity of the purple dye, and thousand additional talents of amber, which they send annually to the king of India. "They exchange the rest for bread, flour, and cotton stuffs with the Indians, from whom they also buy swords for hunting wild beasts, bows, and arrows, being very skillful in drawing the bow and hurling the spear. They cannot be defeated in war, since they inhabit lofty and inaccessible mountains. Every five years the king sends them a present of 300,000 bows, as many spears, 120,000 shields, and 50,000 swords.

"They do not live in houses, but in caves. They set out for the chase with bows and spears, and as they are very swift of foot, they pursue and soon overtake their quarry. The women have a bath once a month, the men do not have a bath at all, but only wash their hands. They anoint themselves three times a month with oil made from milk and wipe themselves with skins. The clothes of men and women alike are not skins with the hair on, but skins tanned and very fine. The richest wear linen clothes, but they are few in number. They have no beds, but sleep on leaves or grass. He who possesses the greatest number of sheep is considered the richest, and so in regard to their other possessions. All, both men and women, have tails above their hips, like dogs, but longer and more hairy.

The dog-headed men were a fierce warrior tribe, but they also traded with the few humans they trusted. They were reported to live primarily in India and Northern Africa, but were seen in many places in between.

Perhaps the most famous Cynocephalus is Christianity's Saint Christopher, who was described in several texts as having the body of a man but the head of a dog. Not only that, but originally the future saint was said to have been a wild and fierce warrior who was captured in battle in Cyrenaica. Not only was this creature a very large man with a dog's head, but came from a warrior tribe of dog-headed men who looked similar to him. According to Christian mythology he eventually met Jesus Christ and learned the error of his former ways. He repented and became baptized and eventually received sainthood and the gift of a human appearance. Multiple historical images show Saint Christopher as having the head of a dog.

The great explorer Marco Polo mentions Cynocephali indirectly while describing his travels to the island of Angamanian:

"Angamanain is a very large Island. The people are without a king and are Idolaters, and no better than wild beasts. And I assure you all the men of this Island of Angamanain have heads like dogs, and teeth and eyes likewise; in fact, in the face they are all just like big mastiff dogs! They have a quantity of spices; but they are a most cruel generation, and eat everybody that they can catch, if not of their own race." 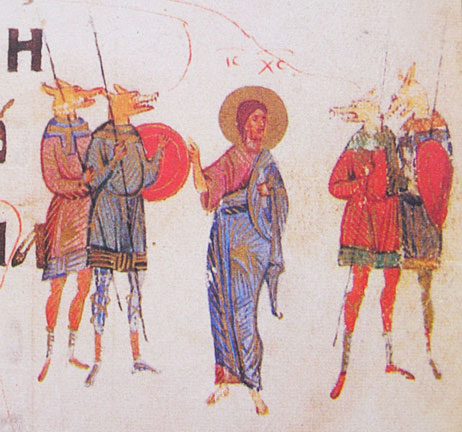 No one knows for sure what happened to this small, but powerful race. It is believed that as the empires around them expanded they were killed off. They were most certainly a warring tribe and would have preferred death in battle to succumbing to another culture's ways. Either way, they have disappeared from human view. Perhaps there are still some of them living in caves awaiting a day where they may return to power.

One can't help but wonder if this ancient race of dog-headed humanoids are related to the various types of semi-wolf, semi-human creatures such as the werewolf.  When considering the history of werewolves, this little known creature may just prove to be a missing link in the mystery of their existence.