The term "doppelganger" is used often to describe someone that looks just like (or at least very similar to) another person, but there are more mysterious and sinister roots than the word suggests.

Literally meaning "double-goer", a real Doppelganger is an apparition that appears in place of a person in a location or situation that would not otherwise be possible.  Many people have seen this image of themselves, both in life and in visions.  Other times, a person may be seen walking through a room when they are, in actuality, several miles away at the time.  The third most common sightings occur when the image of a person appears to walk past an area twice in a row - moving in the same direction - to where it would be impossible for the person to have returned there fast enough. 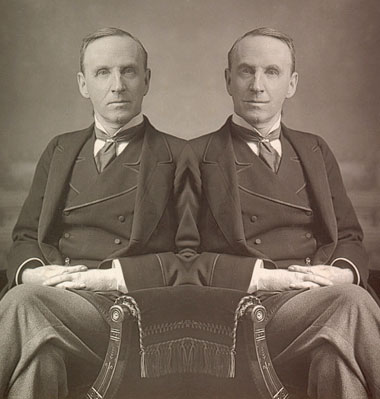 So what are Doppelgangers?  No one is certain.  Many scientists believe the phenomenon to occur based on injuries or stimulation to certain parts of the brain which cause errors in spatial reasoning.  The stories of these encounters are so varied that it's difficult to even classify this phenomenon as a "creature", except for the fact that most often the sightings seem to be intensely spiritual yet disconnected to the original person.

Doppelgangers are often seen as bad omens.  In many circumstances, the Doppelganger shows up during or soon after tragic events, such as in the case of  Vice-Admiral Sir George Tryon of Victorian-era London.  He was seen by multiple guests at a party at his home, simply standing and staring ahead silently, on the same night that he died at sea.

Other bad omens may come in the form of a warning, such as in the case of former U.S. President Abraham Lincoln, who saw his twin apparition on several occasions standing in a mirror while he was lying down across the room.  What he saw each time was an image of himself displaced by a paler second image of himself.  His wife at the time pondered if it meant that he would be elected to a second term but not live through the end of it.  She was right.

This leads me to believe that there are likely spirits that mimic the appearance of a person.  Many people believe that these spirits have ill intentions and wish to do harm to the person they are mimicking, be it physically, emotionally, or by ruining their reputation.  If this were the case, the offending spirit would likely be some form of demon.

In any case, this particular phenomenon does not represent the actual person or their actual spirit.  The apparition is of another origin entirely.  It merely looks like the person it is copying, it is not actually that person in a different space or time, nor is it a sign of an out-of-body experience.

We may never end up knowing exactly what these apparitions are, where they come from, or what they want, but there are too many sightings to disregard them.  Whatever this creature or spirit is, its appearance is rarely good news.

Return from Doppelganger to the List of Mythical Creatures.