The demon Forneus is primarily a protection demon. Though most people think of demons as evil-doers, Forneus actually protects others from the acts of evil-doers. Before the great divide among the spirits, Marquis Forneus served the Angelic Orders in both the Order of Thrones and the Order of Angels. When among the angels his duty was to help channel positive energy and to ensure that justice and balance were upheld, particularly for the weak or those who had been victimized unnecessarily. He continues to work in a similar manner and is one of the demons that summoners look to for help in the times of danger and injustice. 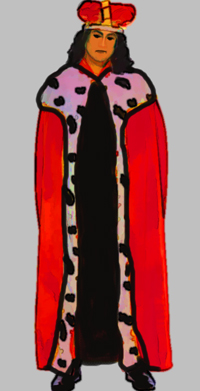 Forneus can bestow a good reputation to those who are deserving. He excels in teaching communicative arts including foreign languages and rhetoric. The Marquis also can influence others to grow a fondness or admiration for a person of his choosing, regardless of previous judgments and conditions.

Though he is ranked as a Marquis, Forneus appears in dress similar to what we think of as a "king's" uniform. He wears a red robe with white and black lining and a Marquis' crown on his head. His demon form is that of a giant sea monster like those spoken of in science fiction books and films, though this seems to be more of his "guardian" form and not one that he uses to communicate with.

Conjuring Forneus is fairly simple. The summoning should take place during the daytime. Orange-colored candles should be set on iron candle holders before being lit and a gift of sunflowers is an appropriate tribute for the Marquis.

Return from Forneus to the List of Demon Names.