The term "golem" is largely misunderstood due in part to the difference between popular uses of the moniker in different mythologies.

In its original and primary meaning, a golem is a humanoid creature made of some sort of inanimate mineral and brought to life through magic.  A person with the right skills could build "person" out of sand, dirt, clay, stone, or like material and then magically animate and controlling the creature.  Golems can be brought to life through various magical methods, but the most common is either etching a magic word into their foreheads or writing a magic word on a piece of paper and putting it in their mouths.

Golems first appeared in Jewish mythology, with the most famous being the Golem of Prague. According to legend, this clay creature was created in the late 16th century by Judah Loew ben Bezalel, the chief rabbi of Prague, to protect the Jews in Prague from persecution by the Roman Emperor. Various versions of the tale exist, but it seems to end with the Emperor begging the Rabbi to deactivate the the creature in exchange for the end of the persecution.  To do so, the Rabbi removed the first letter from the magic word on the golem's forehead, changing it from "emet" (truth, real) to "met" (dead).  This deactivated creature is said to still exist in the attic of the Old New Synagogue in Prague, able to be reactivated by someone with knowledge of the proper activation ritual.  The attic is not open for public viewing.

More modern recreations of golem mythology have made of various materials such as lava or ice, but most commonly they are made of clay or stone. Kevin Smith's 1999 movie "Dogma" even features a golem made of... how to say this nicely... human excrement.  Okay, that's definitely reaching pretty far, but it goes to show that golems can be created out of just about anything. 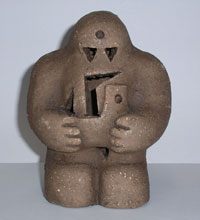 Reproduction of the Golem of Prague

An important note about golems is that they do not have a mind of their own.  They are quite like robots in the sense that they can't think for themselves, they can only follow commands. It is important also to remember that golems take their orders literally. Their controllers must be very specific so the golem doesn't cause more trouble than it helps.

One of the most popular references to the name "golem" comes in J.R.R. Tolkien's classic "Fellowship Of The Rings" series.  In it a creature known as "Golem" plays a central role in the primary quest of the main characters, but is not in any way the same as the golems discussed thus far.  Most likely this use of the term comes from the old use of "golem" as an insult towards people who don't think for themselves.  Tolkien's "Golem" was once a human that was so obsessed with the power of a magical ring that he lost his ability to think of anything else.

Return from Golem to the List of Mythical Creatures.