Above all other things, the demon Gusion is a diplomat. As one of the Dukes of the demon spirit world, he is known to be a blunt, but honest speaker. He seems to take his role of intermediary between the spirit world and the living very seriously, and will answer all questions as long as they are related to his particular skills and interests.

If Gusion were a human, he would be a master of public relations. He can turn even the most hated people into the most beloved and can grant high-level honors, awards, and positions to those who are dedicated to him. He likes to be straight to the point and doesn't like to waste time talking about things that are irrelevant to his line of work. Like many demons, he has the power to see into the past and future, but once again will only bother doing so if it is relevant to the task at hand or the specific questions being asked.

There are a few different descriptions of his appearance. In ancient texts he is said to look like a baboon, while those who have summoned and spoken with Gusion believe that he looks more like a bright, blue-ish creature with a narrow eyes and mouth. In every case he always wears a long robe and has a calm and peaceful demeanor. There is usually a bright light appearing with him, making it hard to make out the finer details of his appearance. The following image is an artistic approximation of what he looks like: 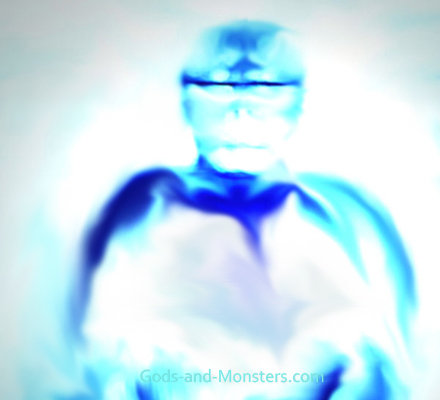 It is interesting to note that Gusion is also described in the ancient texts as sometimes having the appearance of a "Xenophilus". Wikipedia (among other sources) connects this directly to the ancient Greek philosopher and musician Xenophilus, but this is innaccurate. The "Xenophilus" in reference is the blue-ish, narrowed-eyed creature that looks much like what we think of as a modern-day extraterrestrial. Also interesting is that the root word "xeno" means "alien".

Though he appears in a bright, blue light one should only burn yellow candles when summoning Gusion, and would do best to make their summoning circle directly on a dirt ground, rather than on an artificial indoor floor.

Return from Gusion to the List of Demon Names.