If he had to be limited to a single definition, he would likely be called "Hermes, Greek god of Cunning". Though primarily thought of as "Hermes, the Messenger god", there is much more to this well-known character of Greek mythology than exists in that definition.

Hermes was indeed the messenger of the gods, but not because he was born into that role.  Greek mythology tells us that within hours of Hermes birth he flew off and stole the precious cattle of his half-brother Apollo, invented divine worship through sacrifice, and created the lute before returning to his crib. That's quite diligent for a newborn baby, even a newborn god.  Of course, Apollo, being the god of prophecy, amongst other things, quickly figured out what had happened and went to confront the parents of Hermes, Greek god Zeus and Greek goddess Maia. Hermes took Apollo to his cattle and played him a song on the lute so impressive that Apollo not only forgave Hermes for his crime, but let him keep the cattle.  The two gods were said to have formed a tight friendship after this event.

Within the first few hours of his birth, Hermes became the de facto Greek god of travel, thievery, persuasion, diplomacy, and cunning. Then after befriending Apollo, he was taught animal husbandry,  language, trade, and hospitality and became a patron god of those as well.

Greek mythology tends to box Hermes in as one who simply runs errands for Zeus and narrates the occasional myth, but Hermes was a legitimate Greek god whose astute social skills and quick, clever mind gave him a great advantage over many of his peers. His role as messenger, or herald, was not a small one. Zeus himself counted on the bright young god to diplomatically spread the word of Zeus's judgment amongst both gods and humans - a role that was not to be taken lightly. 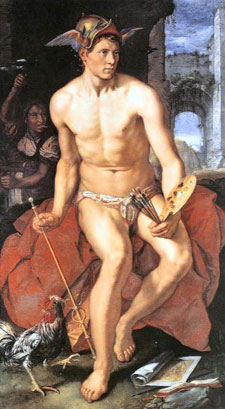 Though he was generally considered a junior member of the Greek gods, Hermes was said to have been responsible for many of the inventions that we associate with ancient Greece to this day. He was thought to have invented the three greatest Greek inventions - the alphabet, numbers, and music, as well as astronomy, gymnastics, measurement, and the use of the olive tree - a staple in the Mediterranean world.

Hermes was regularly depicted wearing a golden helmet or traveling hat, fleet-footed sandals, and carrying a herald's staff.  Some artists drew wings on his hat or shoes, but this is thought to have been solely to depict the speed with which he moved - not to say that he literally had wings on his clothing. As a fast and diplomatic god, he was often sent on important errands. One of his regular tasks included escorting the dead from the Overworld to Hades' Underworld.

Few gods played as many roles as Hermes in Greek mythology, yet he often seems to be more of a background character in many Greek myths. This is probably because he is very social and friendly with both gods and man, and being always on the move. He was indeed an important figure in Greek mythology and is considered responsible for inventing athletic competition which enjoys great popularity to this day.

Return from Hermes Greek God to the List of Greek Gods and Goddesses.