One of my favorite modern American myths, the Jersey Devil has been seen by several people over the course of many years all along the New Jersey Pine Barrens.

The Jersey Devil is described as having a face shaped like a horse, with a small goat-like body and bat-wings.  It has a high-pitched scream and is said to have eaten hundreds of farm animals in the South New Jersey region over the years.  The image below is an artist's rendering featured in the Philadelphia Post in 1909.  As you can see, it's a rather impractical creature that doesn't seem that it would be able to get off the ground, let alone move with the speed it is described as having.

In a way this impracticality only makes this myth all the more interesting.  Several unrelated witnesses reported seeing the same creature in a short period of time.  For them to all describe a creature that doesn't seem to make much physical sense only makes me wonder why, if it were all a hoax, the witnesses would choose to describe a creature that sounds too illogical and fantastic to be real?

The Jersey Devil myth differs from those of other cryptids in that this particular creature seems to have a dark backstory that several long-time residents of the area seem to believe.

As with many myths that become popularized as urban legends, there are many variations on this myth that revolve around similar details.  Rather than list them all, I have put together what appears to be the most likely scenario based on historical data and evidence.

While she is commonly known as "Mother Leeds", the alleged mother of the Jersey Devil was most likely named Mrs. Shourds (not "Shrouds" as is commonly misspelled) and lived in Leeds Point, New Jersey (USA).  She was a solitary woman who had 12 children with her husband, believed to be named Samuel Shourds.  In 1735 the Shourds moved to New Jersey from an unknown place of origin.  Mrs. Shourds was pregnant and ready to give birth to the 13th and final child.  It is thought that the 13th Shourds child was not fathered by Samuel but the Devil himself.  (The number 13 is widely considered an unlucky number in many regions around the world.  Even to this day some hotel floors and airline seating rows even skip directly from 12 to 14.)  Many believe Mrs. Shourds to have been involved in witchcraft or demonic worship and intentionally hoped that this 13th child would bear the mark and power of his true father.  Almost all variations of the legend have her stating aloud "I hope it is a devil".  She got her wish.  The deformed child that she bore became none other than the Jersey Devil, the beast that haunts the New Jersey Pine Barrens. 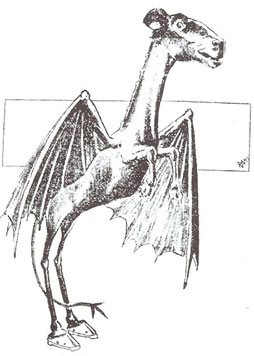 Actual eye witness compilation drawing of the Jersey Devil from 1909.

Regardless of the legend behind the beast, it is hard to ignore the number of sightings of the creature in the Southern New Jersey area in the 1800's and early 1900's.  Even the brother of French Emperor Napolean Bonaparte reported seeing this creature while hunting in the Pine Barrens in the 1820's.  By 1904 the Jersey Devil was thought to be extinct.  Most residents of the area believed it to be a local myth and no more sightings were reported for the next few years.  In 1909, however, all of that changed.

In January of 1909, over one thousand residents of Southern New Jersey reported seeing a flying creature with a horse's head.  This was by far the boldest outing that the Devil had ever had.  For one week beginning Sunday, January 16th, 1909 several people reported seeing a strange creature in towns in Pennsylvania and New Jersey along the Delaware River. Was this the infamous Jersey Devil or was there some other explanation?

While each sighting may individually be criticized by skeptics, it is hard to deny over one thousand people who claim to have seen, heard, and even encountered the same strange creature.  Why did the Jersey Devil choose this time to come out in public?  No one knows.  But soon after, the sightings went back to being rare.

One question that naturally arises over these timelines is how long does this creature live?  If this was merely one creature, then it must have a lifespan of hundreds of years, at minimum.  Is it possible that the creature was able to reproduce?  Is there just one Devil or are there many?  Can the creature even die, or is it of supernatural origin?

These days most people assume that the Jersey Devil is nothing more than a local legend. The thought of such a fantastic creature seems nonsensical and silly to the masses. Still, residents of the New Jersey Pine Barrens have an interesting tendency to stay in after dark.

Want to know more?  Read about all of the Jersey Devil Sightings here, or if you would prefer, return to the List of Mythical Creatures.