The manticore is a mythical creature with the body of a lion and the face of a human.  It has three rows of sharp teeth, like a shark, and a tail with poisonous spiked barbs that it can throw like javelins at its enemies.

The mythology behind this strange creature began in Persia, where it was first known as the Martyaxwar which literally translates to “man-eater”.  As the legend moved west, the name shifted to a more Greek pronunciation, and this creature became most famously known in Greek mythology as “Manticore”.

Though it had the head of a human, it was considerably more monster than man.  It could not speak any languages, and had a voice that was described as sounding like a trumpet.  That’s not to say the manticore wasn’t clever.  It’s favorite way to lure prey was to hide its red lion body in the tall grass so from a distance humans would see only the head of a man.  Those who were fooled into coming too close were never seen again.  And I mean never.  In Greek mythology this beast would devour a human whole, including all of their clothes and all of their possessions, leaving nothing left for family or friends to find.  Often people who had gone missing were assumed to have been eaten by one of these rarely seen monsters.

Manticore mythology held strong over several centuries.  Eventually tales of this mythical monster had spread to India as well, where it became a popular legend, as well as an omen of bad luck and misfortune.

Savvy monster followers will notice that the manticore is very similar in shape to the famous Egyptian Sphinx, whose legend actually originates from the Greek.  Despite the physical similarity (body of a lion with the head of a man), the Sphinx is actually a completely different creature.  Unlike it’s Persian predecessor, the Sphinx was quite brilliant and spoke eloquently, offering humans a chance to save their lives by answering a riddle.  If they failed, the Sphinx would typically eat them.  So maybe the two aren’t so different after all... 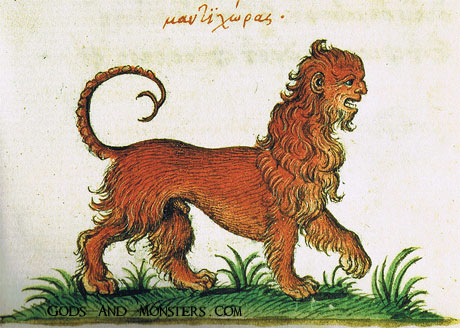 Return from Manticore Mythology to the List of Mythical Creatures.