Like fellow demon Glasya-Labolas, the demoness Marchosias was once a young prodigy among the Angelic Orders. Unlike Labolas, Marchosias is a very open and friendly demon who is known to be a reliable helper to those who have summoned her.

She appears as a very young woman, possibly a teenager, when in human/angelic form. She has large black wings and straight blonde hair. In demon form she appears much differently. In various descriptions the demon form of Marchosias is said to be that of a wolf with griffin wings and a serpent's tail. This fearsome creature is said to also spit fire from its mouth. Often such frightening forms are used by demons in order to scare off amateur summoners (who tend to waste the demon's time). 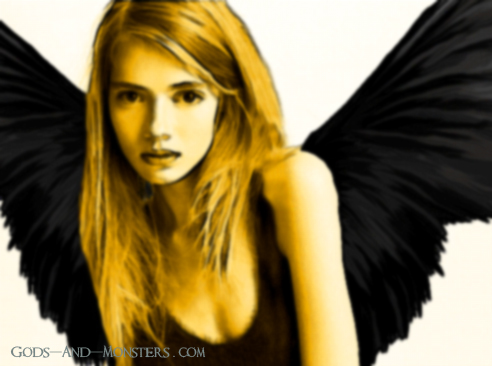 Despite her young and slight frame, Marchosias is a powerful being and a master of conflicts. She is one of the most highly skilled warriors among her kind, displaying a high degree of both physical and strategic knowledge. As Glasya-Labolas is the young demon prodigy in terms of scholarship, Marchosias is the young demon prodigy of war and conflict. Any argument, no matter how large or small, can be swayed by her. She is equally influential over both verbal and physical arguments and can advise of successful strategies to those who call upon her.

Having once been of the Angelic Order of Dominations, Marchosias chose to join the "Fallen" angels who left the Orders long ago. She was initially against the separation of the Angels, but chose to leave after having to choose sides. She is one of a handful of demons who wish for all angels and demons to eventually reunite.

Return from Marchosias to the List of Demon Names.