The Minotaur of Greek Mythology

The Minotaur (Greek mythology), is another one of those monsters that started out as a single creature in mythology and then became an entire race of creatures.  This is similar to Pegasus and Gorgon, who each began as a specific character in myth and eventually became the "brand name" of their race.

The original Minotaur of Greek mythology actually had a name - Asterius.  He was the love-child of Pasiphae, the Queen of Crete and... a bull.  Which explains why he had the head of a bull and the body of a man.  (In most descriptions of later minotaurs, they also have the legs and tail of a bull, as well as the head, but the original Minotaur seemed to just have the head of a bull.)

Naturally, the king was not exactly thrilled that his wife banged a bull and gave him a mutant step-son, but it was pretty much his fault to begin with. 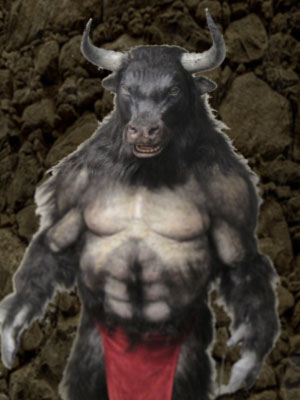 Asterius, the Minotaur of Greek Mythology

It all started when King Minos decided to prove that he was favored by the gods by asking Poseidon (Greek mythology) to grant him a bull to come from the sea.  In exchange, Minos would sacrifice the bull back to Poseidon as a sign of his dedication to the god.

Poseidon agreed and sent a beautiful bull to the King.  Apparently the bull was such a fine specimen that Minos had second thoughts about sacrificing it.  In fact, he decided against it, and instead sacrificed a different bull to Poseidon.

Anyone familiar with Greek mythology can probably guess what happens when you anger a god.

When Poseidon saw that King Minos had tried to pull one over on him, he was understandably upset.  Normally this would be the point where Poseidon would reign a tsunami or two down on the King, but this time he took a more subtle approach.

Immediately Pasiphae fell madly in love with the bull.  So in love, in fact, that she lusted after it.

She enlisted the help of Daedalus, the famed architect/engineer of the kingdom, who then built a fake, hollow cow out of wood and cow skin.  He put it out in the field where the bull grazed and Pasiphae climbed inside...

...let's just say that there was a strategically placed hole in the wooden cow...

Minos freaked out and forced Daedalus to build a giant maze called The Labyrinth.  He then forced his new stepson to live in the Labyrinth forever, sending seven young men and seven young women each year into the maze to serve as food for the minotaur.

Eventually the original Minotaur's days came to an end when one of the seven youths, Theseus, eventually got to the end of the maze, and killed the minotaur.

Since myths and stories have since contained more minotaurs, I guess it figures that either one of the ladies in the maze ended up as Mrs. Minotaur, or some more ladies tried on the wooden cow suit for size.  Either way, the myth of the minotaur continues on.

Return from The Minotaur of Greek Mythology to the List of Mythical Creatures.