The Muses of Greek Mythology

The famous muses of Greek mythology played an important part of ancient Greek culture. The nine daughters of the King of Gods Zeus and the Titan goddess of memory Mnemosyne were the very embodiment of the arts and sciences, and were thought to be the reason certain artists and thinkers were more gifted than others. They were immortal goddesses that inspired great works from both gods and humans alike.

The muses fittingly lived with Apollo, the god of music and the arts, who was their leader, but did not claim them as his wives. Instead, the muses lived with Apollo on the slopes of Mount Parnassus by the Castalian spring and roamed freely from there to spread their inspiration around the ancient world. They often became lovers of both gods and great artists, and their inspiration was highly desired by all artists and thinkers. Their very presence inspired greatness in men, but no one could truly keep them around for long, mimicing the fleeting nature of inspiration itself.

The muses of Greek mythology are particularly interesting in that they make it very clear what the values of their time were. Since the nine muses were to encompass all that was truly important to mankind, their very existence reveals much about the people of their time. It is clear by the nature of the muses that the ancient Greeks and Romans revered music, writing, dance, drama, history, and astronomy to a high degree. Each muse represented a different aspect of these areas, and were all considered equally important.

The 9 Muses of Greek mythology 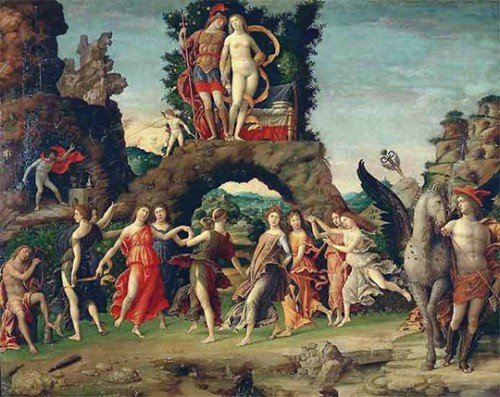 Return from the Muses of Greek Mythology to the List of Greek Gods and Goddesses.