Like many of the other beings we call demons, Purson was once in league with the angels until the Great Rebellion forced him to choose sides and leave their ranks for good. Purson was made a King among the demons because of his great influence over his peers and the high level of respect he receives from them. While 22 legions of spirits may be a small number for someone as influential as King Purson, it should be noted that his legions of followers are all those who followed him from the two angelic orders that he took part in. Half of his followers are formerly from the angelic Order of Virtues and the others are from the Order of Thrones.

The demon king makes quite an entrance upon summoning. He appears in a man's body with the head of a lion, and rides on the back of a large bear. In Louis Breton's drawing from the Dictionnaire Infernal (below) Purson is shown blowing a trumpet, but this is inaccurate. In actuality he holds a venomous viper and his entrance into a summoning is heralded by the sound of trumpets. 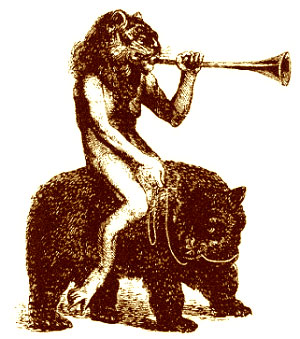 Purson (pronounced "person") is a very helpful ally to those he favors. He sees into the past, present, and future and can even see into the secrets of anyone he chooses. Purson never lies. He will answer all questions truthfully and with his visionary powers that leaves very little subject matter untouchable. The demon king also gives familiar spirits to conjurers that he favors to help in their practice of magic and ritual.

Some believe Purson to be the very same being as the ancient Egyptian god Horus. Horus is one of the most ancient and respected gods, often appearing as either a young boy or as a man with the head of a falcon. He was god of the sky and protector of the pharaohs. At one time or another Horus was the patron god of nearly every Egyptian city. Interestingly, Horus also commonly appeared in the form of a sphinx - a lion's body with the head of a man, while Purson is portrayed as having a man's body with the head of a lion. Similarly, as a sky god Horus was said to represent both the sun and the moon simultaneously. Purson is a daytime demon, but his signature planetary figure is the Moon.

Return from Purson to the List of Demon Names.