With the Sirens, mythology has created a physical personification of the danger of falling for a beautiful woman.

The Sirens of Greek mythology began specifically as a group of creatures who looked like beautiful women, but were really man-eating beasts.  They sat on the shore and sang with voices so seductive and compelling that anyone who heard their song became absolutely mesmerized with them.  So mesmerized, in fact, that they became obsessed with reaching the shore to get closer to the sound.

And then the Sirens would eat them.

The term "siren" is used both in ancient and modern mythology, as well as in modern language in general, to describe something that is simultaneously dangerous and compelling.  In later myths and legends, any creature that lured a man in only to cause harm might be considered "a siren" in the general context of the term.

When I say "a man", this is usually because in myths the siren was usually a female who lured a man in with their beauty.  As with any general use of a term, this could apply to females as well.  In modern stories, one might consider the male vampire to be a creature who uses its seductive abilities to lure in women in order to consume their blood. 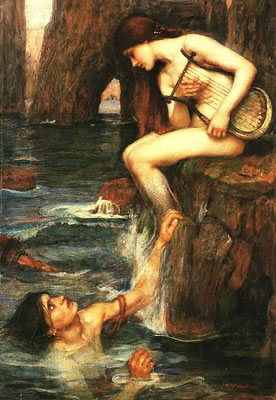 With the original Greek Sirens, mythology depicts these creatures as beautiful women with angelic wings who play there lutes and sing.  They were aloof and didn't make eye-contact with their victims, which made them seem all the more innocent and mysterious.

Different versions of siren mythology have them as having mostly bird-like bodies with the heads of women, or sometimes they had the torso of a woman and the tail of a fish.  Both of these versions are likely confusing the sirens with harpies and mermaids, respectively.

The Sirens appeared most famously in Homer's classic "The Odyssey", where Odysseus had his men tie him to the ship and plug their ears so he could hear the legendary song of the Sirens and not rush to his death in a fit of insanity.  As expected, as soon as Odysseus heard the song he begged his men to untie him, but he wisely had warned them not to do so.  It was said that no one every got to hear the sirens song and live, though, as usual, certain heroes of ancient myth found a way.

Return from Sirens Mythology to the List of Mythical Creatures.