This demon is one of the darker spirits among them all and should only be summoned by very highly experienced conjurers. In general I believe that only the very knowledgeable should attempt to summon any demons ever, however in this particular case where I want to make clear that amateurs would do best to avoid this spirit altogether. For that reason I will not list any instructions on how to summon this demon. Sorry.

Sitri has a strong control over relationships, but in a strange way. It is said that he can make both men and women fall in love, but I believe it would be more accurate to say that he can make any man or woman lust after one another. One of his trademark powers is that he can influence people to bare themselves naked and uses this power primarily on women. He can also make people (again, usually women) bare their secrets. 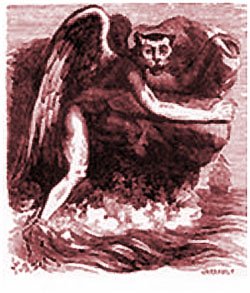 This prince among demons has the form of a man with the head of a leopard and the wings of a griffin, though he will change to human form if the conjurer requests it. It is said that in human form he is quite handsome and dangerously charming.

Some believe that Sitri is the same being as the ancient Egyptian god Seth (aka Set). Seth was the Egyptian god of Chaos and Darkness and was largely believed to be evil. He tricked and murdered others who got in his way - most famously his beloved brother, the Egyptian god Osiris. Sitri and Seth seem to share an affinity for chaos, trickery, and darkness, and like the demon Amon, Sitri has enough in common with his Egyptian alter-ego to make this comparison intriguing. Whether they are the same being or not, neither Sitri nor Seth are beings to attempt to conjure as both have the capacity to be extremely dangerous.

Return from Sitri to the List of Demon Names.