The thunderbird myth comes from Native American mythology, ranging from tribes in the Pacific Northwest to tribes in the Southeastern United States.

A thunderbird is a huge bird with an enormous wingspan who was directly connected to adverse weather conditions.  It was said in thunderbird legend that the bird caused thunder claps each time it flapped its gigantic wings.  Depending on the storyteller, the thunderbird could also cause rainfall or shoot lightning from its eyes. 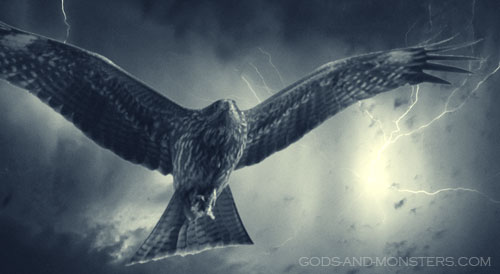 In every case, the creature was powerful and intelligent.  It could cause great storms at will, and was not to be messed with.  Depictions of the thunderbird can be found on several totem poles in various Native American cultures.  It usually appears at the top, sometimes with teeth inside of its beak.

The origins of this bird are largely unknown.  Some researchers believe that the thunderbird legend is based on the sightings of real birds, with some even posing the argument that early sightings could have been from descents of the pterodactyl dinosaur species.  Because of this, the thunderbird goes from being merely a mythical creature to potentially also being a cryptid - a creature whose existence is reported but not proven.

This is a difficult argument to make, since a gigantic bird of any mystical quality (or lack thereof) would likely be easy to spot.  Also, most legends have the bird with bright feathers, which some say they could remove like a blanket upon taking human form.  This directly conflicts with the pterodactyl theory, as their wings more resembled the featherless stretched-skin style of bats.  While there are folktales about creatures that resemble pterodactyls in more modern settings, these are not necessarily connected to the thunderbird in any way.

Return from The Thunderbird Myth to the List of Mythical Creatures.