Aphrodite (Greek mythology) was the goddess of love, beauty, and sensuality.  Known in Roman mythology as Venus, she was said to be the most beautiful of the goddesses, and had many suitors, both god and human.

In ancient Greece, men and gods would go to war over a woman's beauty (remember Helen of Troy?), so Zeus, as the leader of the Olympic gods suspected that Aphrodite would cause a jealous stir among the gods as long as she remained single. He then married her to Hephaestus, the unattractive and partly crippled god of blacksmithing (amongst other things).  Zeus figured this would keep things quiet, but of course when it comes to Greek and Roman mythology, when does that ever happen? 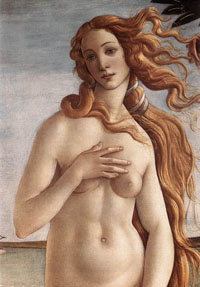 Aphrodite knew she could have any man she wanted, and wasn't particularly pleased with Zeus marrying her off.  She was very independent for a woman of the day, though in fairness she was a goddess.  Aphrodite myths are abound with tales of her various lovers, and from them, her various children.

Of those children, the most famous has to be Eros, god of love, known better to most as Cupid of Roman mythology. Ironically, the love goddess wanted Eros to follow in her forced tradition and marry someone unattractive, but like his mother Eros had to follow his heart and married the beautiful Psyche.  This did not please Aphrodite, but despite her attempts at sabotaging the relationship, Eros convinced Zeus to make Psyche immortal, leaving Psyche with an angry mother-in-law.

The goddess of love was no stranger to causing trouble, though she didn't intend to (outside of sticking her nose into her son's love life). Her relationship with the beautiful Adonis led to his death by the hand of the jealous god of war, Ares.  She also inadvertently started the Trojan War by bribing a poor human man into announcing her the most perfect of all the goddesses.  His bribe - Helen of Troy.  The problem - she was already married.  If you don't already know the story, you can guess how that worked out (Hint: it's not called the Trojan WAR for nothing.)

Return from Aphrodite (Greek Mythology) to the List of Greek Gods and Goddesses.