Ares (Greek mythology) is best known as the God of War. Known to the Romans as Mars, he was one of the Olympians - the gods of the highest order of Olympus.  Ares is sometimes shown in art as both young and old, but he always carried a spear and wore a helmet - perpetually ready for battle.

Ares was not the only god of war in Greek mythology.  Athena, another Olympian, was also a god of war, but in a very different context.  Athena represented the strategic, organized, and victorious side of battle while Ares represented the opposite - bloodlust, courage, and ferocity. Both were thought to be equally important in battle, and warriors would pray for their favor.  It is said that Ares would even accepted human sacrifices in order to gain his assistance. 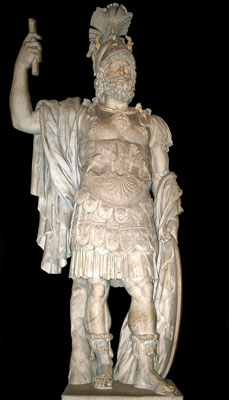 Statue of Ares, God of War

In Greek mythology Ares often had a quick temper and was prone to jealous outbursts.  He lusted after Aphrodite, the goddess of love, and eventually lost her to Adonis, the most beautiful man in the world.  Not accepting defeat (as a god of war shouldn't I suppose), he turned himself into a boar and killed Adonis.

Ares (Greek mythology) was also father to the famous Amazon women of the Doiantian Plain.  These hardy warrior women were some of the most brutal warriors in all of mythology.  Ironically, their mother was Harmonia, the goddess of harmony and concord.  I guess they took after their father.

In modern mythology, Ares is probably best known as the title "villain" in the hit video game series "God of War".  Many people confuse the central character in the series, Kratos, as the god of war, yet Kratos, the character from the game, is actually a variation on Greek Mythology's Kratos, the God of Strength.

Return from Ares (Greek mythology) to the List of Greek Gods and Goddesses.