Artemis (Greek mythology) is the goddess of the moon and hunting.  She also represented the female side of childbirth and chastity.  Her twin brother is the sun god Apollo, and their parents are Zeus and Leto.

Along with her brother, Artemis is often simultaneously a healer and a hunter.  The moon goddess is known for protecting and assisting young flocks, but is also known as "the stag-killer" for her proficient hunting with a bow and arrow, her signature weapon. 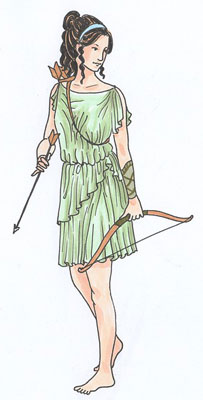 In Greek mythology Artemis prided herself on her maidenhood, or chastity. She often had an entourage of nymphs around her who were her friends, attendants, and hunting partners. In one famous Artemis myth Aktaion, a male hunter, stumbled upon the goddess bathing in the woods.  She was so enraged at this violation of her privacy that she turned the hunter into a stag and drove his dogs into a frenzy, who subsequently chased down and ate him.

This kind of hot temper was not unusual for the gods, but speaks to the interesting duality of Artemis in particular.  She often chooses to heal, nourish, and cultivate young girls and animals (and sometimes warriors), but at the same time will hunt down the same animals in their older age or cast a deadly disease upon a person without any remorse or hesitation.

It is said that the moon is the astrological representative of ever-changing moods.  Just as the tides shift, pushing in or pulling out, so do those ruled by the moon change in emotion throughout a single day.  Perhaps Artemis, the moon goddess, is simply influenced by this nature.  In many places in Greek mythology she appears to be an emotional teenager, and often gets in fights with her step-mother Hera.

In a more modern myth, Artemis takes pity on a young hunter who is cursed by Apollo to live only by the light of the moon and gave him supernatural hunting powers in exchange for lifelong devotion to her alone.  This is said to have been the origination of the first vampire.

Return from Artemis of Greek Mythology to the List of Greek Gods and Goddesses.