Athena the Greek Goddess of Wisdom and War

Athena, the Greek goddess of war and wisdom (amongst other things), was one of the most powerful of all of the gods and goddesses in Greek mythology. Athena was one of the many daughters of the King of gods, Zeus, but she was the only one that Zeus actually birthed himself!

It is said that her mother was Metis, the Titan goddess of wisdom, and Zeus's original wife. To understand how she could have a mother but be born solely from her father requires a little backtracking into Greek mythology. Please bear with me.

Zeus came to power by overthrowing his father, Cronus. Cronus's mother, the greath earth goddess Gaia, foretold a prophecy in which one of Cronus's children would eventually overthrow him and take control of both gods and men alike. Cronus decided that the solution to this problem was to devour each and every one of his children after they were born. Eventually his wife, Rhea, couldn't take it anymore and gave him a stone wrapped in a baby blanket, which he promptly swallowed - thus saving her last son, Zeus, from this terrible fate. Eventually Zeus fulfilled the prophecy by overthrowing his father and splitting him open, which is how the rest of Cronus and Rhea's children came spilling out. Zeus became King of gods and men and the days where the Titans ruled were done.

Now, what does this have to do with Athena? Well, it turns out that Gaia had another prophecy once Zeus became an adult. She foretold that his wife, Metis, would first give birth to a powerful daughter then would give birth to a son who would overthrow Zeus the way he overthrew his father. Knowing this, Zeus devoured Metis while she was still pregnant with their daughter to avoid this son ever being born.

His plan worked in that he never had a son by Metis, but what Zeus didn't realize was that his daughter by Metis was more strong-willed than he imagined. After a bout of terrible headaches Zeus finally begged the blacksmith god Hephaestus to split his head open with an axe to relieve the pressure. Out popped the goddess Athena, fully dressed in armor and ready to do battle.

This story of her birth offers a great insight into the goddess herself. The multifaceted Athena, the Greek goddess of war, wisdom, poetry, artisans, craftworking, and intellect, was as strong-willed and powerful as her great-grandmother Gaia had predicted. She was well-known to be Zeus's favorite daughter, and was forever loyal to her father, no matter what he got himself into.

It may seem contradictory for the goddess of art and wisdom to also be a goddess of war, but in this case it made sense. Another son of Zeus, Ares, was also a god of war, yet the term "war" meant two entirely different things to these very different gods. Ares was the god of chaotic battle, bloodlust, ferocity, courage, and violence. On the other hand, Athena was the goddess of strategy, organized fighting, advanced weaponry, and skilled manipulation on the battlefield. If Ares was offense, Athena was defense. If Ares represented pure force, Athena represented controlled strength. The two were not enemies by any means, but warriors would often choose one or the other to pray for their favor depending on their position in battle and the style they chose to fight with. 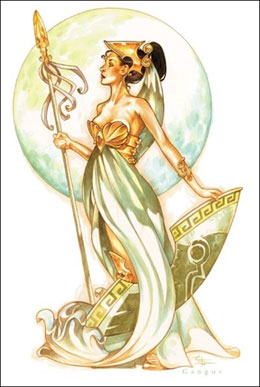 Athena was very involved in human affairs and often took sides in great battles, such as Greece versus Troy. She always took a cunning, strategic point of view, though, making her a powerful ally in any war. In modern language "Athena the Greek goddess of war" is less fitting than  "Athena the Greek goddess of wisdom", even in reference to her role in battles. It was her wisdom and strategic planning that often turned the tide of a battle to the victor.

It is probably obvious that the name "Athena" is similar to the famous Greek capital city of "Athens".  This is no coincidence. Originally Athens was founded as "Attica", and both Athena and the the great sea god Poseidon both wanted to be the patron gods of the city. They both gave a gift to the city in order to earn its patronage. First, Poseidon used his mighty trident to create a spring in the middle of the city, which flowed into the sea, giving the Atticans a direct line to the water. In response, Athena created an olive tree in the city center, which provided food, wood, and oil in endless supply. Seeing the great benefit of the tree over that of the ocean stream, the people of Attica chose Athena as their patron god and changed the name of the city to "Athens".

The goddess of war and wisdom shows up in many myths, including the tapestry contest with the mortal Arachne, and the transformation of the maiden Medusa into a hideous gorgon. Athena also plays a large role in Homer's legendary epic, "The Odyssey".

Return from Athena the Greek Goddess of Wisdom and War to the List of Greek Gods and Goddesses.