On the summit of Mount Olympus Greek mythology lived and breathed as the meeting place of the gods. This mountain in northern Greece was said to be where the gods and goddesses built their homes and palaces. Any of the gods could live on the great mountain summit, but no human was ever allowed there under any conditions.

The gods would come to the central palace when summoned by the leader of the gods Zeus. There the 12 Olympian gods and goddesses all held court, with Zeus serving as the de facto leader of the gods. Though the gods of Greek mythology didn't necessarily have the structured leadership that the humans of the time did (King, Queen, Prince, etc.), Zeus was very much considered by all to be the leader of gods and men, and Mount Olympus was his domain above all others.

The Mount Olympus of Greek mythology is portrayed a bit differently than the mountain one would see today.  At its highest peak, the Olympus reaches nearly 1,000 feet above sea level and is steep, foreboding, and difficult to climb.  In Greek Mythology Mount Olympus was an ideal paradise where the weather was always perfect and the gods could enjoy their feasts of divine nectar and ambrosia.

The mortal scribes and poets could only image what went on in the land of the gods, for no mortal would ever see it for themselves. In Mount Olympus Greek mythology had its stronghold - a paradise set above the clouds that only the gods could ever reach.  This was once put to the test when the mortal Bellerophon tried to ride the winged horse Pegasus up to Olympus and was painfully reminded of the limits of the gods hospitality.  Zeus sent a mere gadfly to attack Pegasus, who kicked and reared and accidentally threw Bellerophon from his back.  The former hero severely injured his legs and went blind from the fall. 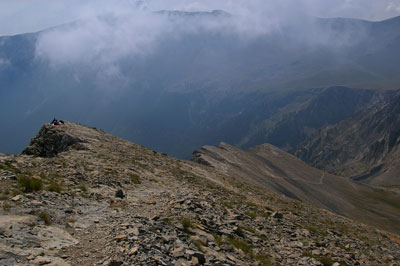 The Olympians rule over the mythical mountain was uncontested until the God of Monsters Typhon, with the help of the other monster gods, challenged Zeus for control.  Most of the gods fled in fear, but a few stayed, including the war goddess Athena and the goddess of victory Nike. Together, the gods managed a victory after the hardest battle ever fought in Greek mythology.

Find out who lived on Mount Olympus with the List of Greek Gods and Goddesses.