The term "white werewolf" requires a bit of an explanation.

In reality, white werewolves ARE black werewolves, just with a twist.  They both share the trait of having Human Werewolf Syndrome, a condition where the human mind is never lost to the violent rush of rage that plagues most of werewolf kind.  Along with this they share the trait of having a pigment mutation in their skin and fur color, causing them to be all white or all black, respectively.

The core difference between the two is that a white werewolf can never take human form.

One might wonder - so doesn't this just make them a 'wolf', not a 'werewolf'?

You could say that white werewolves are in every way human except physically.  They are born to parents who carry the werewolf gene, but they are a genetic mutation OF the genetic mutation that creates a black werewolf.

Normally, during childbirth, a mother werewolf always gives birth in human form.  An expecting mother is often known to stop wolf-form transformation altogether during or soon after the first trimester.  This is an internal survival mechanism designed to protect the fetus.  As such, baby werewolves are normally born in human form as well, and don't begin the werewolf transformation until their teenage years. 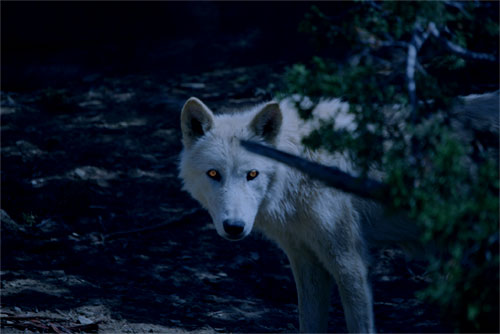 White werewolves are the sole exception to this rule.  They are the only werewolves born in wolf form.  During labor, the mother will lose control of the transformation process and shift to full wolf form in order to give birth to a white werewolf.  There are no known instances where a wolf-form child was born to a human-form woman.

Though extremely rare, white werewolves have been around for centuries.  Ancient werewolf tribes worshiped them as gods.  Now their status in the werewolf community is unknown.

Return from The White Werewolf to the Werewolves home page.