A mutant is not a specific creature, but a general term for any living plant or animal that has been significantly
genetically altered. Mutations occur naturally - every species has them. Usually these are minor variations in the genetic code that allow a species to adapt to environmental changes. If anything, they can be considered random variations that exist for the hope that they will improve the future evolution of the group.

Not all mutations serve to better a species, though. Some mutations, particularly those related to radioactive or environmental toxicity, don't follow the natural course. Instead of improving a species, some mutations only create unimaginable monsters. 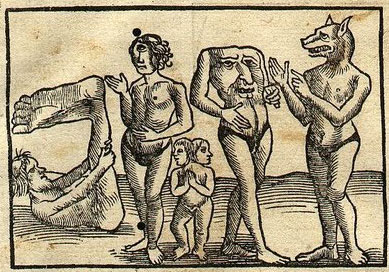 These types of mutant animals and humans (or a combination of the two) might explain some of the more random creatures and cryptids that have been seen over the past couple of centuries. Of course, this is just one potential theory, but if it is true, it could explain creatures like the Jersey Devil, the Mothman, or the Bray Road Beast.

We already know a bit about Werewolf Genetics, part of which includes a mutation known as Human Werewolf Syndrome. These genetic mutations are among the normal kind, even for an abnormal creature.

As mentioned, not all mutations are genetic or occur from birth. Some mutants are creatures who have been exposed to toxic chemicals or disease, for example, and these mutants tend to transform from normal to bizarre within a single lifetime - sometimes as short as years or in exceptional cases some mutations begin to appear within a matter of days.

Though it's not quite the same thing, many mutants are altered by evil itself. It is widely believed that souls become mutated through demonic influence, which is why demons and dark spirits often appear as twisted, mutant forms of their former selves. One of our readers sent in an encounter with strange, mutant spirit that may be explained by this.


Return from Mutants to the List of Mythical Creatures.