Pan
Greek God of the Wilds

There were few deities in any mythology as enigmatic as Pan the Greek god of shepherding and living in the wild. He wasn't a shy character, but he lived in the wild, particularly on the mountainsides of Arcadia, and therefore wasn't seen all too often by mortal men.

Pan is perhaps the most well-known of the Satyrs - men with the legs and horns of goats. Like all satyrs, he was fun-loving and energetic, but also moody and prone to temper tantrums. Like their four-hoofed brethren the centaurs, satyrs generally enjoyed drinking, partying, and lusting after ladies. Pan in particular desired nymphs above all other females, which may be due to being raised by nymphs after his mother (whose identity is highly debatable) apparently shunned the goat-god when he was born with a full beard, tail, hoofs, and horns.

Pan's father is the wily Greek messenger god Hermes, who took him to Mount Olympus shortly after his birth where Pan delighted the other gods with his musical talent and fun-loving sense of humor. Though he is strongly connected to Hermes, he is more often talked about in connection with the Greek wine god Dionysus. Satyrs in particular loved Dionysus, who was well-known for his wild parties which included plenty of wine and lots of women.

Most of the time, though, the hoofed god was tending to his flocks in the mountains of Arcadia. A very talented musician like fellow shepherd god Apollo, he may just as well have been called "Pan the Greek god of woodwinds", for he was a master of any wind instrument, particularly his signature pan-pipes which were named after him. 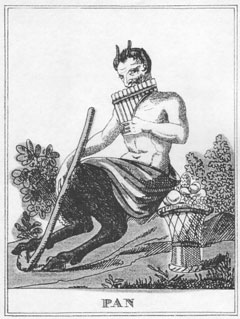 Though not the most intimidating god in Greek mythology, Pan had a conch shell that, when he blew it, would strike fear into the hearts of all who heard it.  It is from this that we derive the English word "panic", meaning the feeling that Pan could crate among those who opposed him or those he sided with.

Return from Pan the Greek God of the Wilds to the List of Greek Gods and Goddesses.